Blueprints are Rules (Admin/Rule Designer) that allow us to model systems and Environments on the basis of variables which are grouped/conditioned by Environment.

In the example below, we have two environments: PROD and TEST. Each of these contains one or more GROUPS, which have been renamed SERVER_1, SERVER_2 and SERVER_3, respectively, and reference pre-configured servers e.g. GenericServer (Resources/GenericServer). 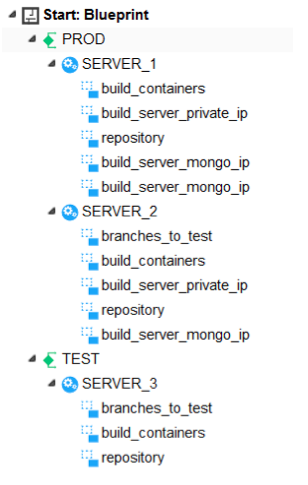 Each of these GROUPS contains a series of variables, which in turn contain configuration data for the respective servers referenced by SERVER_1 and so on.

Below is a model representation based on the rule created, illustrating the two environments mentioned above, and the servers within them, and in turn the variables containing their respective configuration:

The aforementioned variables are created and configured in Resources/Variables.

Blueprints are in turn specified within Natures (Resources/Natures) via the newly created Blueprint combo.

This enables Blueprints, along with any servers (and their configuration), file paths etc. to be passed easily to Projects. Grouping variables in this way streamlines the process of configuring Projects, which previously had to be performed manually for each Project.

Within Projects we can control which variables are available in which Environments e.g. an Amazon server that is only accessible within PROD. 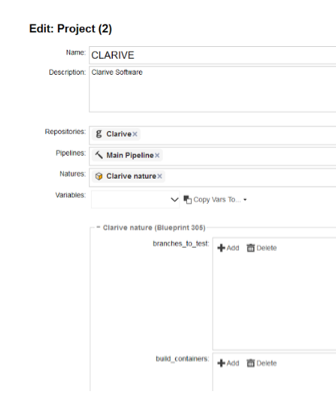